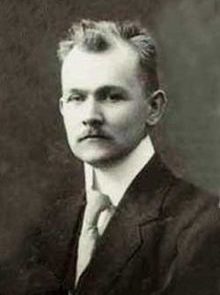 Bernhard Schmidt was born on March, 30th 1879 as the first of 5 children to Karl Konstantin and his wife, Maria Helene. K.K. Schmidt was a writer on the island of Naissaar, which is off the coast of Tallinn, Estonia, in the Baltic Sea. He was also a farmer and fisherman. Swedish was the language spoken on the island and in school, but at home the Schmidts spoke German. At the age of 15, Bernhard lost his right hand and forearm in an accident that happened in an experiment with gunpowder. This did not prove too much of a handicap, though; later that year he built his own camera, photographed the local people and sold the pictures.

In 1895 he left Naissaar for Tallinn to find work as a telegraph operator with a rescue team. Between 1895 and 1901 he worked as a photographer and in the electromotor works of ‘Volta’. Around 1900 he made his first 5″ diameter object glass – not perfect, but he improved it as he made observations of the Nova Persei in 1901. That year he left for Goeteborg in Sweden to attend a technical school, but instead ended up at Mittweida in southeastern Germany in October, preferring the more practically-oriented school there. Schmidt favoured hands-on practice to theoretical work. In the summer of 1903 he fashioned a mirror for the observatory of Altenburg, probably his first work geared towards professional use. Most mirrors he made at that time were sold to amateurs. This gave him some money to live on, since he got little financial support from his parents.

In 1904 Schmidt opened an optical workshop in Mittweida in a small house, and later moved to a more spacious place. He offered his skills to observatories to improve their optics, lenses and mirrors. The start of this small business was slow, but after awhile his name spread all over Germany. In 1913 he was asked to rework a 50 cm (20 inch) telescope lens originally made by Steinheil & Sons. After that E. Hertzsprung made very delicate observations of double stars with this telescope and it remained in use until 1967. Schmidt also sold two mirrors to the University of Prague, one 60 cm (24 inch) and one 30 cm (12 inch). His business was slowing down around 1926, when he was offered work at the Zeiss optical shop in Jena, Germany. Having been independent all his life, however, he wanted to work only when he liked to, so he refused the offer.

In 1927 he sold his shop and moved to Hamburg to work at the nearby observatory in Bergedorf as a freelance optician. The director then was R. Schorr, who knew about Schmidt’s abilities. He also knew that Schmidt liked French brandy and paid him only small sums of money at a time. ‘The optician,’ as Schmidt was called, also made observations with various instruments; in 1928 he took pictures of Jupiter, Saturn and the moon. During a journey back to Hamburg from observing the solar eclipse of 1929 in the Pacific ocean, Schmidt discussed the possibility of a special camera for wide angle sky photography with Walter Baade, who in 1931 joined the Mount Wilson Observatory in California.

After returning to his workshop at the observatory, Schmidt developed his now famous telescope. He made the first one in 1930 with a main mirror of 44 cm (17.3 inch) and a corrector plate of 36 cm (14 inch). The focal ratio was f=1.75, the field of view 7.5 deg. The very first photograph with this new instrument was taken from that site, showing a tombstone from the nearby graveyard.

His design of a wide field camera for stars and celestial objects is today known as a “Schmidt Camera.” The original Schmidt Camera is now in the museum of the Hamburg Observatory in Germany. It is not in the original state, it has been altered two or three times. The main mirror created by Schmidt was destroyed during a two-year lease to the German navy during World War II, when it was used to make observations of the British harbours off the French coast. The Navy paid for a replacement, made by the Zeiss optical shop in Jena. Also on display in the museum are some of Schmidt’s papers and some pieces of glass he figured and polished.

Bernhard Schmidt died of pneumonia on the 1. December 1935, shortly after returning from a trip to The Netherlands. He was buried in a cemetery very close to the observatory. Minor planet (1743) Schmidt was named in honor of Bernhard Schmidt. It was discovered by C.J. van Houten and I. van Houten-Groeneveld at Palomar on the September 24th, 1960, the name was proposed by Dr. Paul Herget.