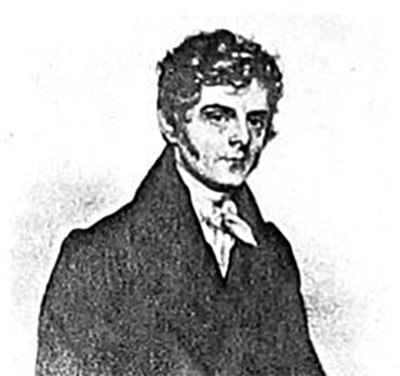 Georg Simon Plössl was born September 19th, 1794 in Wieden near Vienna. He was the son of a carpenter and learned to turn wood during an apprenticeship from September 28th 1807 to 1811. On May, 9th 1812 he started to work with the Voigtlaender optical firm in the Rauhensteingasse, today Himmelpfortgasse No. 7. Supported by J.F. Jacquin and J.J. Littrow he studied Mathematics and Optics. Plössl founded his own workshop in 1823 in his parents house located in the Freundgasse, Vienna. Jacquin was teaching Chemistry and Botany in Vienna and used to buy Voigtlaender optics for his microscopes. He changed to Plössl’s optics soon after the new shop had opened. After severe starting problems Plössl’s business flourished and he moved to bigger shops in 1831 and again 1835. In 1840 his workshop employed 28 workers, until 1845 the number had increased to 36 at the shop in the Feldgasse 215. In these years he improved the quality of achromatic microscope objectives and developed the fine adjustment of microscopic eyepieces introducing a fine pitch screw. Similar to Kellners optics from Wetzlar, Germany, Ploessls microscopes were essential in advancing the research in medical science. A price list published in the ‘Astronomische Nachrichten’ of October 1829 shows that Plössl also made special optics: he offered a diamond lens and a sapphire lens to be used in microscopes. These lenses were not offered again in the next list dated September 1831; he probably continued to make them on special request. He also made telescopes of a new ‘dialytic’ type. In 1850 he sold a 10.5″ refractor with 11.5 feet focal length, several other instruments of 6″ to 8″ diameter were sold to Jassy in Rumania, Athens in Greece and Biczke in Hungary. Plössl received the Gold Medal of Honor for Arts and Science in 1847. He died on the 30. January 1868 in Vienna following a severe injury by a dropping sheet of glass, cutting the artery near his right hand. This injury caused blood loss and gangrene. He died at the same place where he was born, the street is named Freundgasse 5, Vienna city borough ‘Auf der Wieden’. Another small street was named after Plössl in Vienna in 1875. The business was continued by M. Wagner as ‘Fa. Poessl & Co.’. The last workshop was in the Goldeggasse 6, Viennas 4th city borough, and closed in 1905. Today in amateur astronomy his name is well known for the eyepieces based on his design. References: