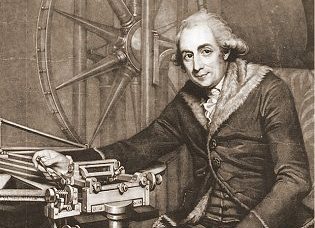 Jesse Ramsden, the son of a Yorkshire innkeeper, was born October 6, 1735. At the age of 16 he was apprenticed, first to a cloth worker and later to a scientific instrument maker in London. By the time he finished his apprenticeship he was highly skilled in engraving and his reputation rapidly increased after 1762 when he opened his own business. A few years later he married Sarah Dollond, the youngest sister of Peter Dollond.

Ramsden’s inventive genius led to the development of a new universal equatoreal, two new micrometers, and a new construction of eyeglasses. A telescopic eyepiece of his design is still used today. But his most important and well-known invention was a new engine for dividing mathematical instrument scales.
While the best dividers at that time achieved an accuracy of no better than 3 seconds of arc, Ramsden’s divider made it possible to inscribe lines accurate to ½ second. The British government awarded him a handsome premium for this invention. By 1789 he and his workmen had constructed nearly a thousand sextants. He made important improvements in theodolites and transits, invented a pyrometer to measure thermal expension, and a device for determining telescopic powers. His most famous work was a five-foot vertical circle for the Palermo Observatory. Another well-known instrument from his shop was the four-foot diameter theodolite delivered to General William Roy for his survey to link the Paris and Greenwich Observatory meridians. This was done with unprecedented accuracy owing largely to Ramsden’s theodolite.

He was elected a member of the Royal Society in 1786 and of the Imperial Academy of St. Petersburgh in 1794. The Royal Society awarded him the Copley Medal in 1795 for his “various inventions and improvements in philosophical instruments.”

He was highly respected and became known as “Honest Jesse.” He employed as many as 60 workers but insisted that only work of the highest quality left his shop. His instruments were highly praised by J.D. Cassini, the director of the Paris Observatory. His total disregard for time, however, earned him the animosity of some. The Roy survey was delayed three years at great inconvenience waiting for delivery of the all-important theodolite. Even when the king ordered an instrument from him, Ramsden delivered it, as the king noted wryly, at the right day and the right hour, but one year late!

Telescopes and other instruments made in Ramsden’s shop are highly prized by collectors today because of their careful and accurate construction and attention to detail.